Well, in the past 2 and a half weeks I've not only learned a lot MORE about Shibas, but also now remember what it's like to have a puppy. Everything is new for little Knox and sometimes he handles new things well, and sometimes not. Such an example would be this fine rainy morning. Knox and I were out for a walk and came across big scary garbage trucks. Knox was so scared he pulled on his leash and dashed home. Usually I'M the one pulling him for walks. And ever since then the poor thing has been randomly whining and just seems really nervous. I feel terrible =(

Shibas are a REALLY mouthy breed. I remember with my dogs in the past, as puppies they were MONSTERS when it came to biting. Knox seems to be going down the same path. But he is also biting faces, legs, clothes, etc. The face biting really scares me and I'm hoping that 1: It will eventually go away after this puppy phase is over; and 2: How we're handling it is correct. He gets into these modes once in a while when he's so hyper and overstimulated he is SO mouthy and biting us non stop. We try to either crate him, while giving him plenty of toys and/or we just walk away into another room where he can't get to.

I just want to pet him and kiss him and he is NOT having that when he's in that "mode".

I'm starting to think he doesn't have a UTI. The peeing in the house has stopped. But the occasional trips into the living room to let him explore is also over (This is where he had most of his accidents- more recently, the accident right on our brand new couch!) Ever since we blocked him off completely he has been fine with no accidents (knock on wood)

We are doing our best with socializing him as much as possible. He likes meeting new dogs so much which makes me happy and I hope it stays this way. He also likes meeting new people, although now he gets so excited when people pet him to say hello, he usually chews on their hands.  A tad embarrassing but I think most people and dogs are forgiving of that because he IS a puppy still.

Our first Puppy K class is tonight and we're really looking forward to it and can't wait to see all the puppies interact!

And check out the cool seat belt harness we got for him! He feels so-so about this. But I say tough nuggies, it keeps him safe and us safe. 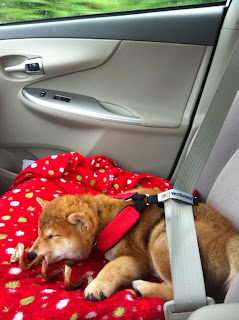 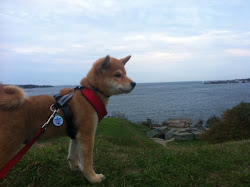